Actress Shilpa Shetty’s husband Raj Kundra is once again on the target of trolls. A video surfaced in which he was seen wearing a jacket covered from head to waist. Raj Kundra came to watch the film wearing the same clothes as he goes to do theft and dacoity in the movies. Just then, users started commenting fiercely about this. 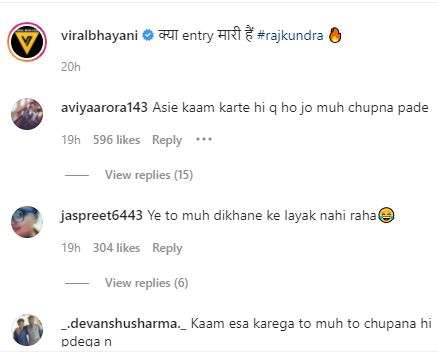 Users are commenting like this- Ye to muh dikhane ke layak nahi raha, Asie kaam karte hi q ho jo muh chupna pade, Kaam esa karega to muh to chupana hi Why do you do it…, if you do this work, you will have to hide your face.

Let us tell you, in July 2021, the Crime Branch of Mumbai Police had detained Raj Kundra in the pornography case. Raj Kundra had made more than 100 pornographic films in the last one and a half year. After getting information about this, he was taken into custody. Raj Kundra got bail after spending nearly two months in jail in this case.